Most people probably never think about it, but, as the Navy is part of the Armed Forces, during Basic Training (Boot Camp) Navy recruits are required to spend time on the small arms (rifles & pistols) firing range and met a specific level of competence.  I suspect that it's not as rigorous as in the Army or Marines, but there is still some requirement.

Now I spent a lot of time shooting with Dad, but it was mostly shotguns, with which he was very good.  In fact, I don’t remember him ever missing when shooting at a rabbit, pheasant or squirrel.

He didn’t spend as much time shooting rifles, but the few times I was with him he was more than adequate at hitting tin cans and other plinking objects.

Dad did his Navy Basic Training at the Great Lakes Naval Training Station near Chicago.  During the course of this training he broke one of his eyeglass lenses.  It was the right lens, the one he needed to look through to aim the rifle.  Because of this he was having some difficulty shooting with adequate accuracy - he couldn't “Qualify.”  He was worried, because he didn’t expect to get his new lens before the training ended.

He did have one advantage though.  The rifle the Navy used for this training/qualifying was a Mossberg US44 - a bolt-action, magazine-fed .22 target rifle.  The reason this was an advantage for Dad was because a few years earlier, while Dad was in High School, his Father had gotten him a Mossberg M44 bolt-action, magazine-fed .22 target rifle – the civilian model of the rifle.  They are duplicates except for some identifying stampings.

Dad was determined to qualify, even though he couldn’t see the targets very well.  He spent extra time at the range.  During one of these sessions he had the bright idea of flipping his glasses upside down, so that he could view the target though an unbroken lens.

While he was experimenting with this idea, the Petty Officer who was his Drill Instructor came along and noticed what he was doing. 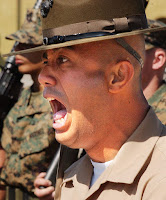 “Locker,” he bellowed, “what in the hell do you think you're doing?”

The DI shook his head in exasperation.  “Carry on,” he said as he stalked away.

A few minutes later Dad got the hang of the upside-down glasses and met the qualifying requirements.